Organisations are increasingly generating vast amounts of data, the meaning and value of which is not generally well assimilated. Hence a common requirement is for a web application that offers secure, meaningful access to this data in graphical and textual form. Adroit Technologies have a way of producing robust, easy-to-use web applications that can do this for you. Find out more...

Enterprise solutions like Adroit Smart SCADA are able to generate vast amounts of real-time as well as historical data that is often stored in SQL databases. In its raw form, as large numbers of rows and columns structured into tabular datasets, the true meaning and value of all this data is often impossible for the average user to assimilate. Hence a requirement that is common to most organisations: a web-application that can be hosted on the company Intranet/Internet server offering secure yet easy and meaningful user access to this data in graphical and/or text formats.

Most organisations have unique aspects to their underlying business model, which translate into varying requirements and priorities as to how all this data should be interpreted and visualised. This means that a one-size-fits-all reporting solution simply cannot be provided as part of some shrink-wrapped, off-the-shelf software offering.

So, over the years, Adroit Technologies have been commissioned by a variety of organisations to produce custom, web-based reporting solutions out of which a common approach to doing this has emerged.

This page provides an introductory overview of the approach taken and also shows some screenshots of the different report screens that have been produced. It ends off by quoting some end-user testimonials.

Where SQL query times are an issue, for example when querying massively large datasets, the Controller executes native SQL queries on the underlying model data instead of the much more simple and flexible LINQ queries.

More often than not, data returned by the Model in response to LINQ or native SQL queries (dotted arrow in Model View Controller Architecture above) is transformed by the Controller into some kind of ViewModel before being passed to the View component of our MVC web application.

There is generally a one-to-one correspondence between MVC controller Actions and Views implemented in the View component, in that Action methods call View methods of the same name, passing the ViewModel constructed from the data returned by the Model. In our Alarm Management example above, the Index Controller method ends by calling the Index View method, passing it a list of most frequently occurring alarms.

Each View method is implemented as a page of HTML, specifically a file with .cshtml extension since we make use of ASP.NET Razor Syntax meaning that C# code can be embedded in the page. This is in order to be able to carry out any required processing logic on the ViewModel data that has been passed to the page, before returning native HTML back to the web-browser that initiated the original URL request.

As well as providing a systematic, logical way of factoring the web application into different functional areas, the fact that Views are totally separate from the rest of the application means that the look and feel of View pages can easily and flexibly be modified without in any way affecting the underlying compiled core base of the application. One very pertinent example of why this is such a good thing is that View pages can very easily be translated into non-English languages by end users without having any impact on the rest of the application which is shipped as compiled DLL or EXE file(s). Some of the screenshots shown later are from Views that have been translated into Serbian by Serbian end-users. 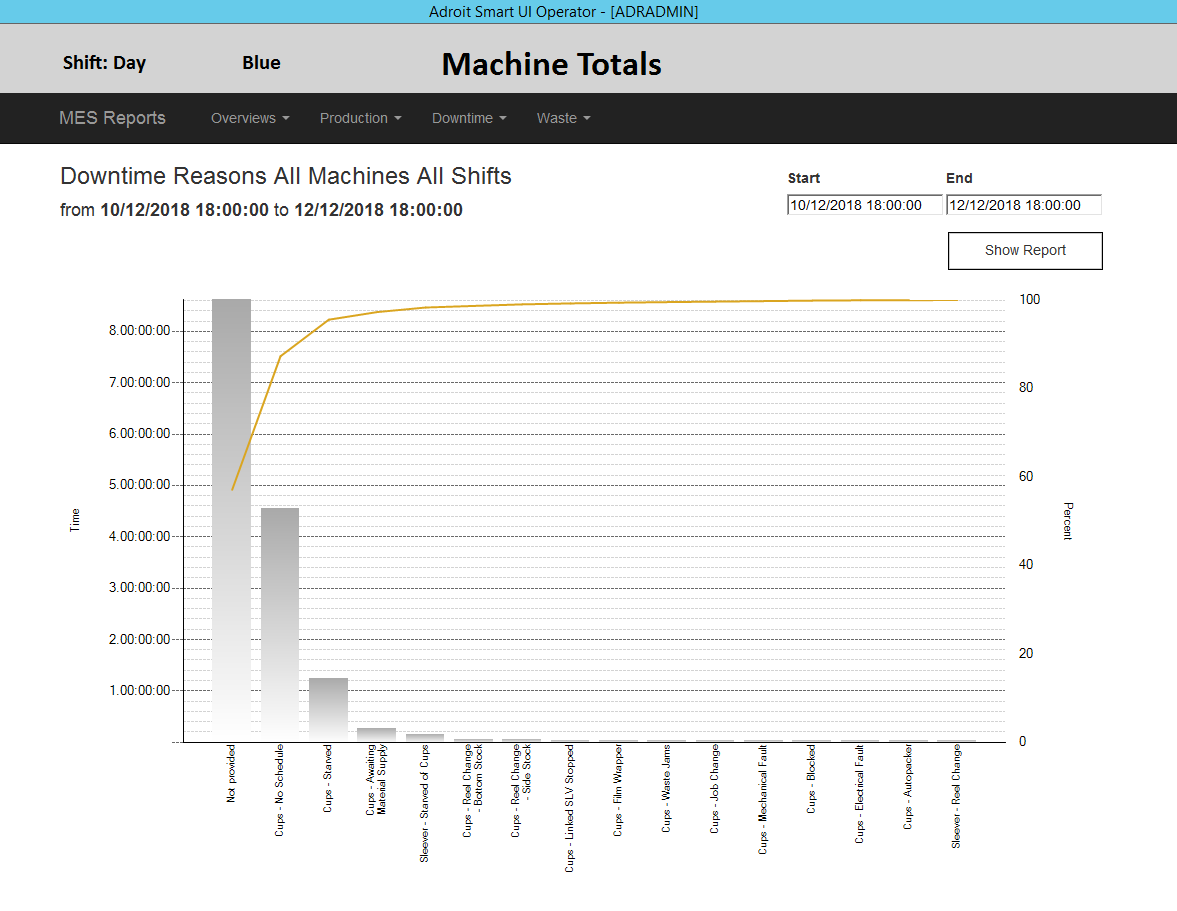 Another quite interesting graphic from our simulated cup factory, this time showing reasons for machine downtimes. There is also a Pareto curve enabling easy application of the 80-20 rule as to downtime causes.

The controller is ShiftTotals and the action is DowntimeReasons in this case. 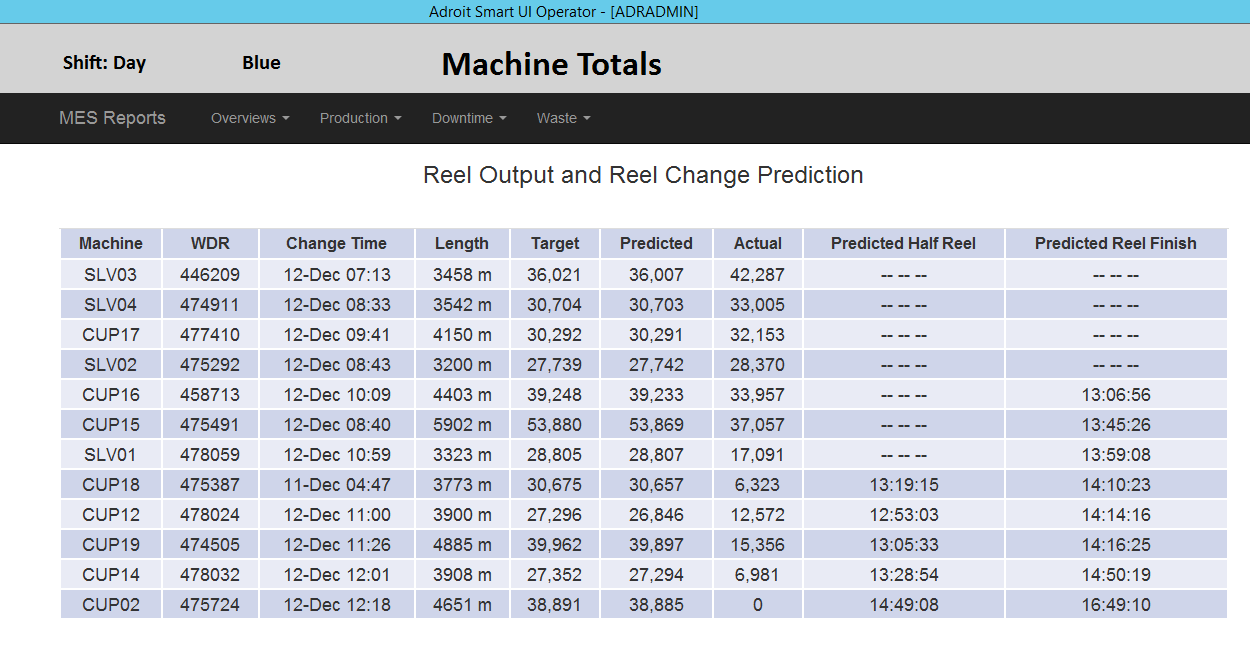 A final page from the cup factory simulation. This one shows predicted reel completion times and production targets in a tabular display with alternate lines in contrasting colours.

The controller is ShiftTotals and the action is ReelDynamics in this case. 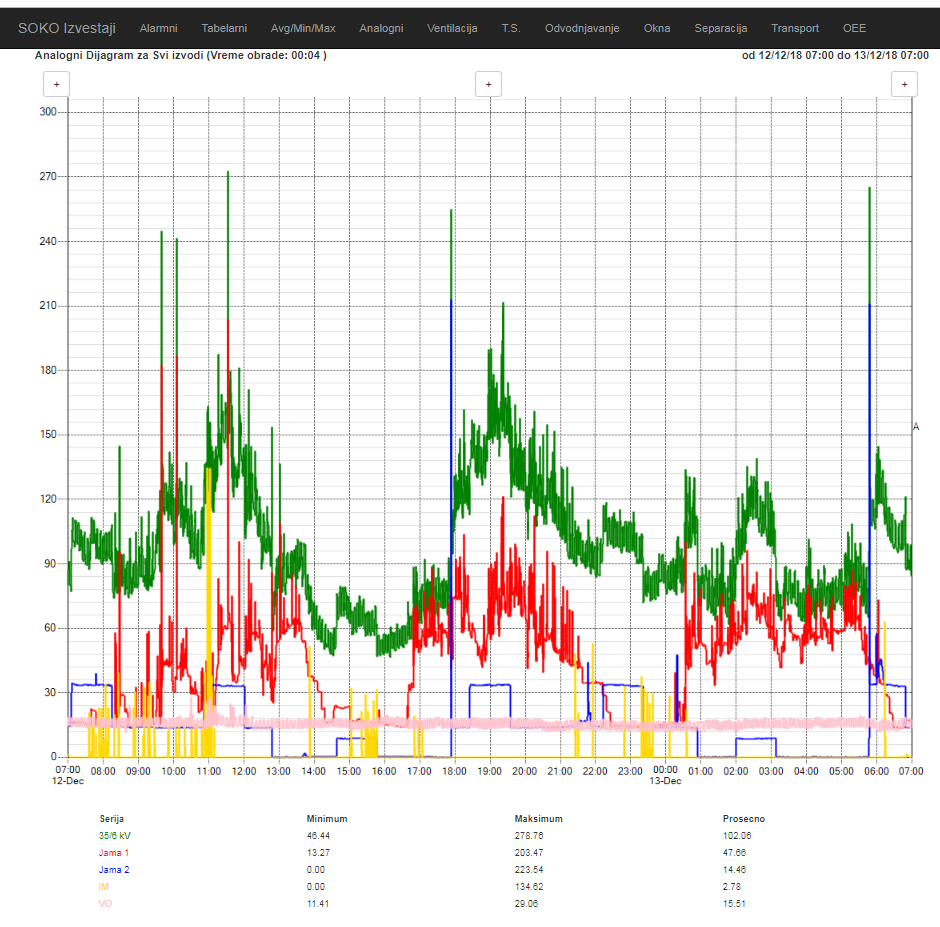 This is a page showing various parameters over a 24-hour period from a coal mine in Serbia. Note that the entire web-page including navigation bar, data legend, etc. are all in Serbian not English.

The controller in this case is DL_ (Data logging controller) and the action is EditDiagram1?... The question mark following the action name is a long parameter string.

The page shown above is the Index action for the _DL controller and is a good example of how users can create their own report navigation framework. Each of the blue ActionLinks shown on the page above represents another parameterized URL report link into the application. In this way users are able to implement their own report navigation strategy in their own language, and with a layout that makes operational sense to them. 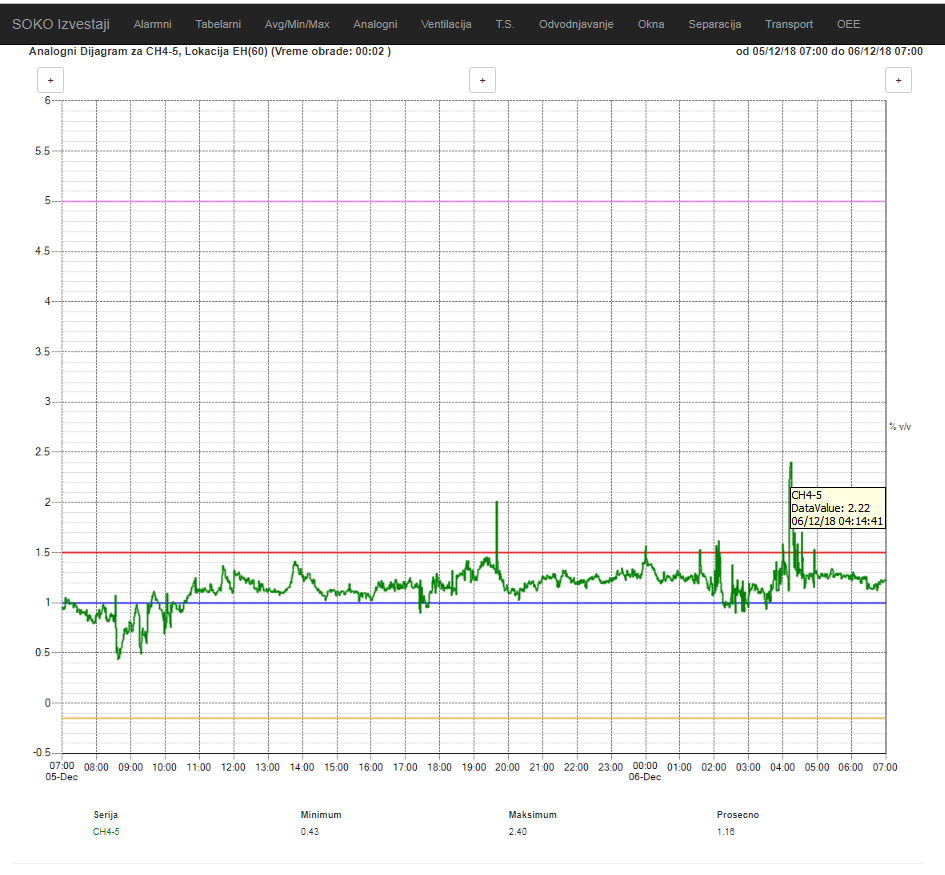 Another graph from the Serbian coal mine. This example shows that tool-tips can be displayed on the web page when hovering over a data point in order to provide more detail.

Ranko Radoja, Master of Mining Engineering and Director of Soko Mine, Serbia: "Every working day starts out with a cup of coffee and Soko Reports (The mine works 24h in three shifts, the most important part to me is what happened in the second and third shift)."

Vladimir Cvetkovic, Master of Mining Engineering and Soko Mine Manager: "I use Soko Reports application via my tablet, mobile phone and desktop PC, regularly during non-work hours, so I can see exactly what is happening in the pit. All the necessary reports have been created, I can literally see all the technical aspects and all the parameters that I need."

Dusan V. Pokrajac, Master of Electronics Engineering and principal electronics engineer: "The simple installation of the application, the stability and quick response time, the easy creation of reports, the monitoring of who accessed the application, the compatibility with all web browsers: Firefox, Chrome, Opera... etc., and accessibility from all platforms (Windows, Android, iOS). These features make the application great."