This Smart UI Re-use Techniques quick start is the fourth in the series of Adroit Smart SCADA quick start guides. As with other quick start guides, it is not a substitute for the training material or in-built help but rather an additional resource to these

A widely accepted fact amongst software development professionals and quality assurance practitioners is that, for software, re-use is the only sure-fired way of ensuring quality and consistency. The term itself, re-use might at first seem a bit obscure, but it refers to the fact that by the time you get around to using a software component for real, it will already have been used many, many times before. It is the reason why large software development projects enrol whole armies of beta testers and inside trackers – to make sure software is well and truly exercised before being deployed in general use

In the context of Adroit Smart SCADA, there are several axes of re-use, offering varying degrees of reusability. In this guide we will be finding out about two of them: Wizards and Templates in some detail

Wizards allow you to reuse the same graphical set of objects and assigned behaviours, over and over again - assigning different values, without having to recreate them from scratch every time. In other words, a wizard is a re-usable design-time object, much like a Windows control. Very importantly, a wizard also has the ability optionally to update all the instances of itself that have already been added to graphic forms, if the wizard is subsequently modified

Templates are similar in some ways to wizards in that they facilitate graphic object and behaviour re-use. But instead of being instantiated at design-time by pasting onto a graphic form, they are always referenced at run-time. This means that any changes made to a template are always reflected whenever the template is subsequently referenced

By way of revision of something learned in Quick Start Guide 1, but also because we need some suitable dynamically changing data, we start by creating half-a-dozen Expressions that vary with respect to time in noticeably different ways.

Next, in order to verify these tags are changing as expected, and also by way of revision, we chart the tags using a LineChart control

We then create a fairly simple graphic form, adapt it to become a Wizard and then re-use it several times – once for each different expression

Finally, we create a Template from the same graphic form previously used to create a Wizard

Creating some tags to display

Making use of the in-built SystemInfo.second tag is a simple and effective way to create dynamically varying tags. For example, an Expression agent of the form:

when set to evaluate Continuously and where v1 contains the value of SystemInfo.second, i.e. the current real-time second value, will result in its value toggling between one and zero every n seconds

Displaying tags on a LineChart

Create a fourth graphic form, Form_04, and drop a LineChart control somewhere in the top half of the form. Remove all extraneous paraphernalia from the chart by unchecking the various options as shown in the following two screenshots:

As shown, ensure that:

Note that on the minute boundary, when SystemInfo.second is zero, all pens show a zero value as you would expect. Thereafter, each successive pen shows a value toggling between zero and one at progressively slower rates – every second for pen 1 through to every six seconds for pen 6

Now we have established that we have half-a-dozen tags changing in recognisably different patterns, we are in a position to start creating a wizard and then a template, and thereby try out some of the re-use mechanisms described earlier

Before creating a wizard from this, verify that it all works by running the Popup form. You should see the rectangle alternating green and red every second, if you are displaying slots from the TOGGLE_EVERY_01 Expression agent

Next, re-open Form_04 and drag wzdPopup from the Favourites pane over to a free area on Form_04 - just below the LineChart previously configured, say, and click the Paste Wizard option that pops up

This will cause the Substitution Assignment dialog, as shown below, to be displayed

In the left column, you can see our place-holder string ‘n’ which in the right screenshot is substituted with ‘01’. If the substitution resolves correctly the result column shows the completely substituted string and in light green background. If something is invalid about a substitution the background colour will be light red

Paste the wizard six times, at different horizontal offsets below the chart – once for each of our Expressions, and the result should be something like…

To create a template from your Popup form, first make a copy of it by saving it as, say, tplPopup

Next, for each of the behaviours that reference TOGGLE_EVERY_01 Expression, change the ‘01’ substring to ‘{n}’ as shown, just like you did when previously creating a wizard. Once again, the curly brace substitution delimiters are very important but the ‘n’ character is just a place-holder, and can be anything you like. Save the tplPopup template popup when you have changed all the required behaviours

Next click the Open TemplateGO Aliases… link at the very bottom of the dialog and substitute value ‘01’ for Alias name ‘n’, as shown

At this point, if you run Form_04 you should see our tplPopup template form, parameterized for the first Expression TOGGLE_EVERY_01 shown inside the TemplateGO container control

For each button, choose the relevant input for our Alias ‘n’ place-holder corresponding to the button. The screenshot shows ‘05’ allocated for button 5 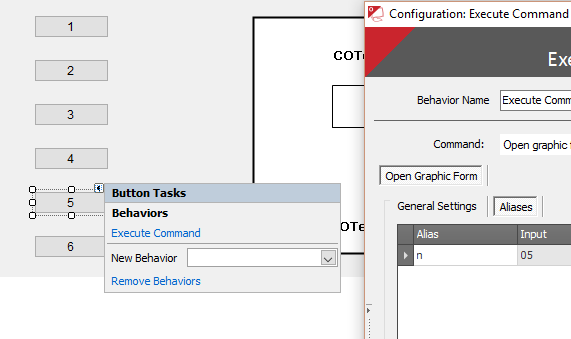 Execute Command behaviours don’t work in Designer preview Run mode, so we’ll have to adapt the Navigation Template used in earlier quick start guides by adding a button to display the new Form_04 created as part of this re-use guide, which when clicked should result in something like… 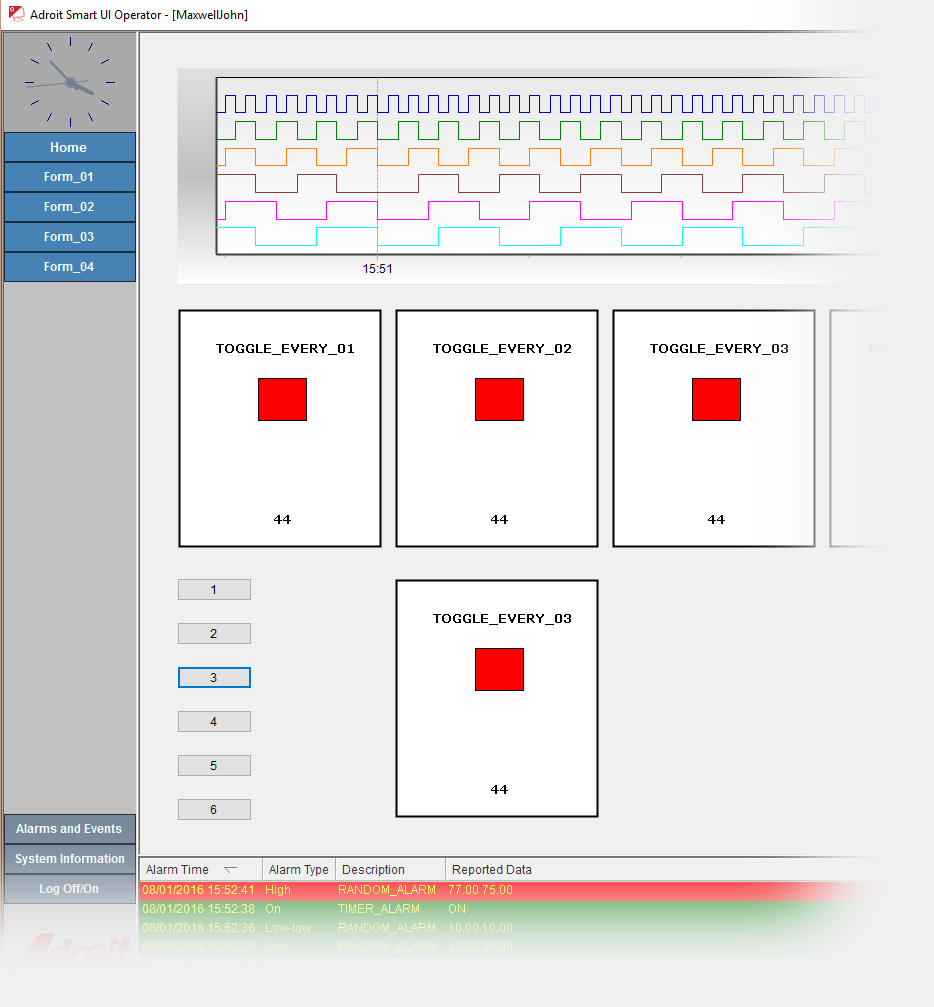 Clicking any of the six bottom left buttons will cause a suitable parameterized instance of tplPopup to be rendered inside the TemplateGO container. The screenshot shows button 3 clicked and correspondingly TOGGLE_EVERY_03 displayed

These may seem trivial examples – merely showing different tags going on and off at different intervals, but hopefully they are pertinent enough illustrations of configuration re-use, to make you realize that the techniques elaborated can be of great benefit both productivity-wise and quality-wise in a real SCADA HMI project context

Please email any feedback or suggested improvements to support@adroit-europe.com