The SCADA Additional Components bundle, provided along with the recent Adroit 8.4.2.2 long-term support release is available separately and includes, amongst other things, a Geographic Information System (GIS) Add-on: 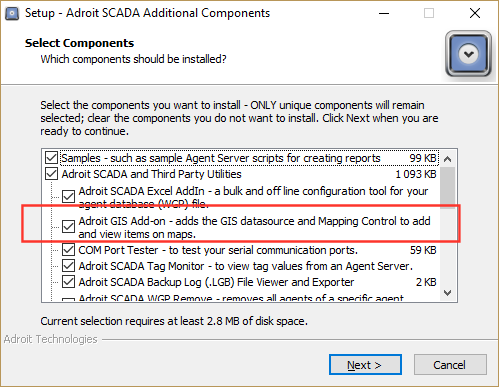 In this quick start guide we install the GIS Add-on and build a demo water treatment application monitoring half-a-dozen different reservoirs geographically spread around UK. The reservoirs and geographical co-ordinates in decimal notation are shown in the table below:

Installing the GIS Add-on and creating a GIS data source 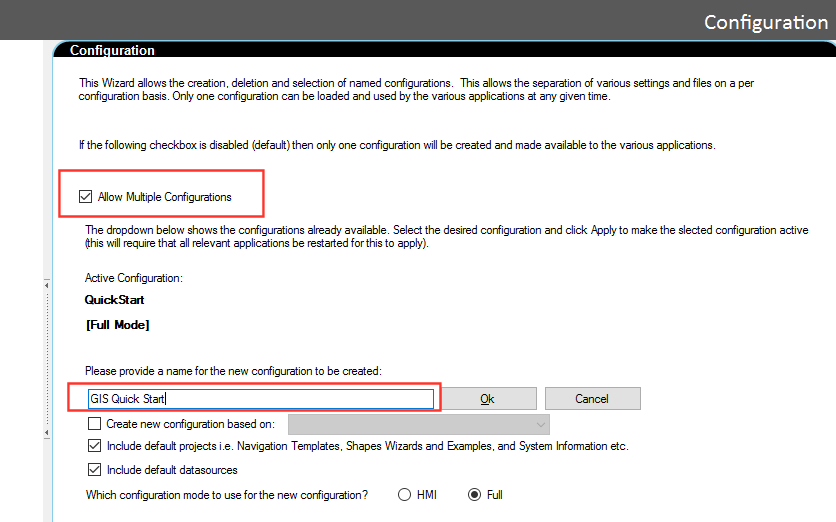 You can now go ahead and install the GIS Add-on by making sure it is selected in the list of additional components, and clicking the Next button (cf. screenshot above)

Firstly, after opening the Configurator in Smart UI Designer create AgentGroups corresponding to each of the six geographically dispersed sites…

In other words, the agents to be created for each site are…

Now create the six Digital agents named XXX_INTR, starting with ARD_INTR, Ardleigh Intruder Alarm, and successively copy them, each time just changing the name and description just as you did for the levels


As an illustration of how to adapt existing artefacts, we are going to customize this template for a water treatment application


We will now do a similar thing for the existing Digital Faceplate Template also in the Shapes Wizards and Examples project. So locate this template, open it and save it as Intruder Alarm Template in GIS Quick Start project

GIS relates to SCADA HMI because quite often the starting point for user interaction in geographically dispersed applications is a map overview. This is usually a natural and logical reference point to centralize information monitoring and control tasks from

By using the GIS Add-on, you can add intelligence to map overviews by providing icons that represent the actual location of plant items and equipment

The Adroit Smart UI GIS Add-on uses a hierarchy when defining items that adheres to a structure adopted by existing ISA S95 and ISA S88 standards:

So, in our water treatment application, we have the six geographically dispersed sites: Ardleigh in Essex, Bosley in Cheshire, Derwent in Northumberland, Drift in Cornwall, Llyn Cwellyn in Wales, and Threipmuir in Scotland

Each site has a single area: Reservoir

And each reservoir has two equipment items: Level (Transducer) and Intruder Alarm (Detector)

There are two ways of configuring the GIS Datasource

To gain an appreciation of both methods, we will configure the first site interactively, and then bulk-configure the remaining sites via an Excel Workbook

To create the first site, right-click the GIS Datasource GIS1 and select Add Site from the context menu

Right-click the newly created area Reservoir and select Add/Edit GIS Items from the context menu. This pops up the Add/Edit Items form containing a five-column grid as shown below:

At this stage you may wonder how just displaying the same Level or Alarm template at each site can depict information specific to the site. Well, remember these forms are templates after all, and they need to have their Aliases assigned before they can be meaningfully displayed

To this end, there is a section at the bottom of the Add/Edit Items form, shown below, that allows you to add and edit Additional Attributes for each item of equipment. For each item we create an additional attribute with its name corresponding exactly to the name of a Form Alias on the template. For our Level template recall the alias is Analogue Data Element and for our Intruder Alarm template the alias is Digital Data Element

The values assigned to these attributes are the actual agent names to be used for the equipment items. For the Ardleigh site these are Adroit.Analog.ARD_LVL_001 for Level...

and Adroit.Digital.ARD_INTR for Intruder Alarm…

Note: these attribute values are just Agent names and not full Tag names that include a slot. This is because the template itself will append different slot names to the aliased agent name depending on which property or properties of the agent it has been designed to depict

The above screenshot shows an Excel workbook with six separate worksheets, one for each site. The worksheets are named according to the site names we have chosen

There are seven columns in each site worksheet. These correspond to the five grid columns described previously, but with the addition of a column at the beginning defining the Area name and a column at the end listing additional attributes

Once you have completed the worksheets, configure the GIS datasource by right-clicking GIS1 in Smart UI Designer, and selecting Import from Excel on the context menu

As we did when manually configuring the first site, be sure to leave a small geographical offset between the different equipment items in each area so that they are individually distinguishable on a zoomed map view

Now that we have a properly populated GIS datasource along with some template forms that can be displayed, it’s time to make use of the other Smart UI GIS component, the MappingControl

Other Controls that can be associated with Mapping Control

Navigation can be enhanced by associating TreeView and/or AlarmViewer controls on the same form, with a Mapping Control

Starting with an alarm viewer, locate the AlarmViewer control under the Adroit tree-node of Smart UI Designer Toolbox, and drop an instance onto the Overview form

Next, locate the TreeView control under the Windows Forms tree-node of Smart UI Designer Toolbox, and drop an instance onto the Overview form If you now Run the form, it should look something like the screenshot below: 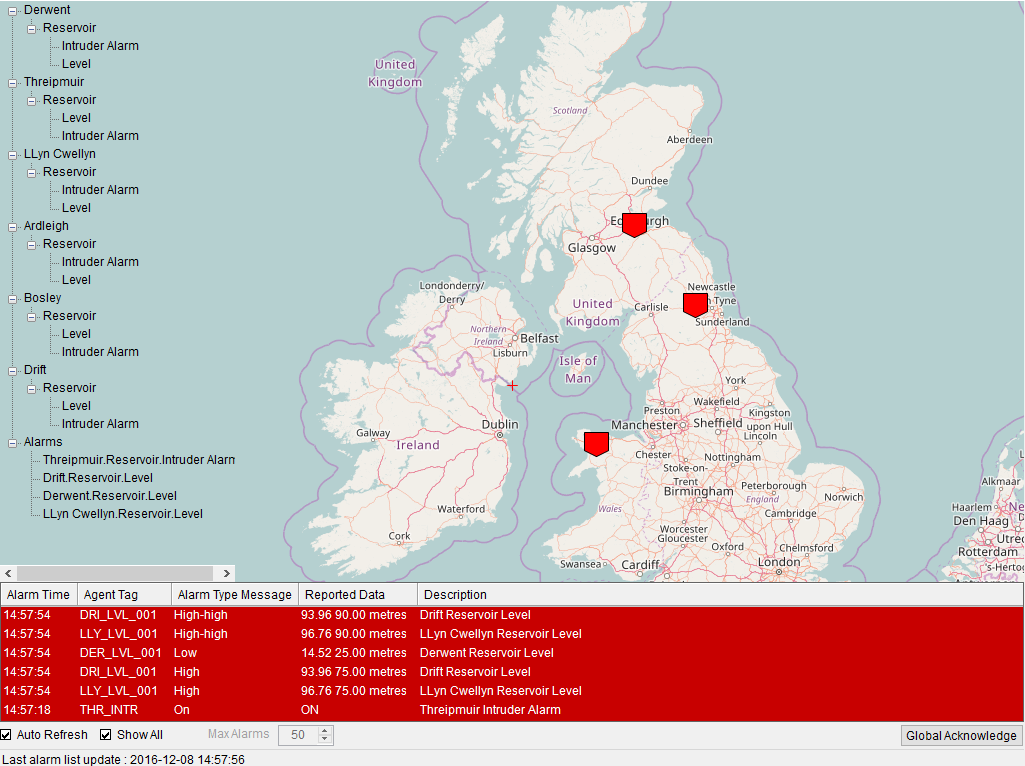 The tree view on the left, when opened up fully, shows all Sites, Areas, and Equipment Items as well as list of currently active Alarms

Similarly double-clicking an alarm in the AlarmViewer at the bottom should also cause the MappingControl to display a zoomed view centred on the item clicked... 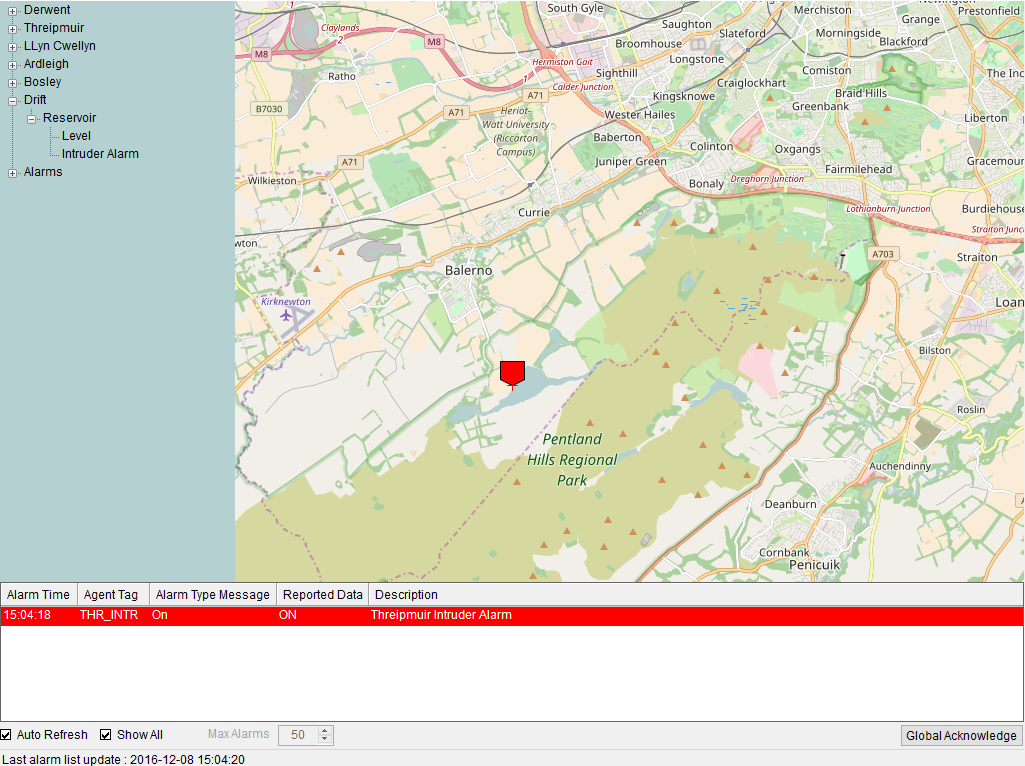 Putting it all together in a project Navigation Template

Best practice in Adroit Smart UI dictates the use of some kind of standard project template to navigate around the graphic forms in an application. So once again, we will modify one of the existing templates to suit our purpose

Locate and open the Project_Navigation_Template form under the Navigation Template Buttons Left and Top project in Smart UI Designer. Save this form with the same name but in the GIS Quick Start project

Firstly, delete the AlarmViewer control at the bottom of the navigation template since we already have an alarm viewer on our Overview form

Next, delete the Raw Materials, Processing and Finished Products buttons from the navigation panel on the left of the form, since these buttons are not relevant to our water treatment application

You may have noticed when running our Overview form in Designer that there is no obvious easy way to get back to the startup zoom level once you are zoomed in at any site. The following workaround overcomes this limitation

Next, re-open the modified Project_Navigation_Template form and by clicking the glyph top-right of the Home button, change the Execute Command behaviour to load form Blank instead of the previous project landing page that it was set to

Similarly, by clicking the glyph top-right of the Main_TGO TemplateGO, change its Default Graphic Form to load to form Blank instead of the previous project landing page it was set to

At this point we should be ready to run the complete application in Smart UI Operator, so modify the Default profile Operator Settings as shown in the screenshot below... 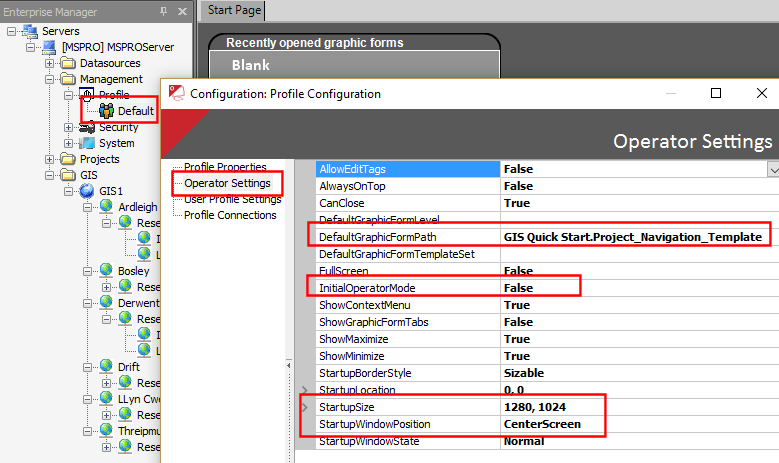 Run Smart UI Operator and you should see something like… 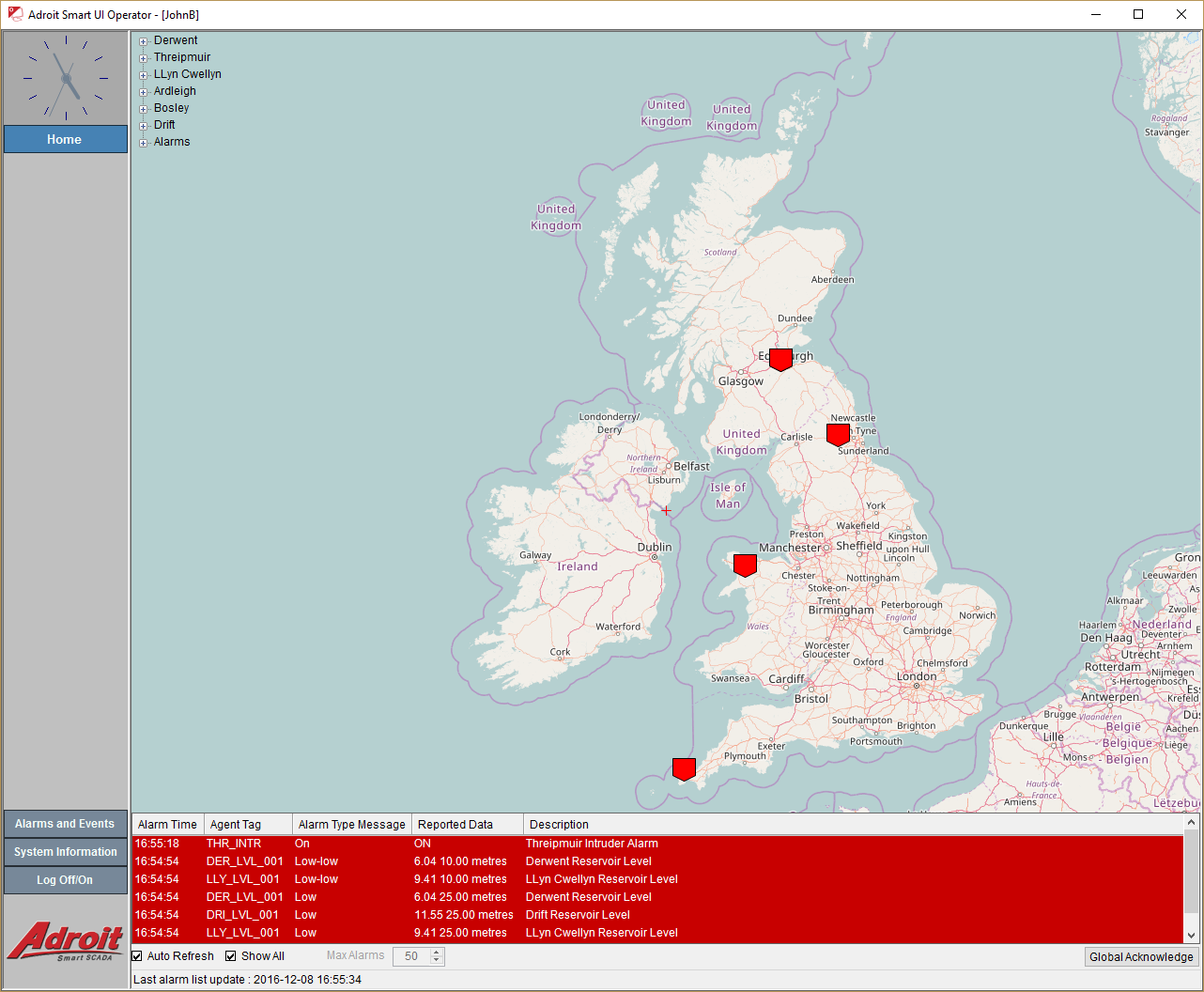 Double-click a reservoir Level Alarm somewhere, then click the alarm push-pin to bring up the Reservoir Level Template aliased according to the site you are looking at…

Double-click an Intruder Alarm somewhere, then click the alarm push-pin to bring up the Intruder Alarm Template aliased according to the site you are looking at… 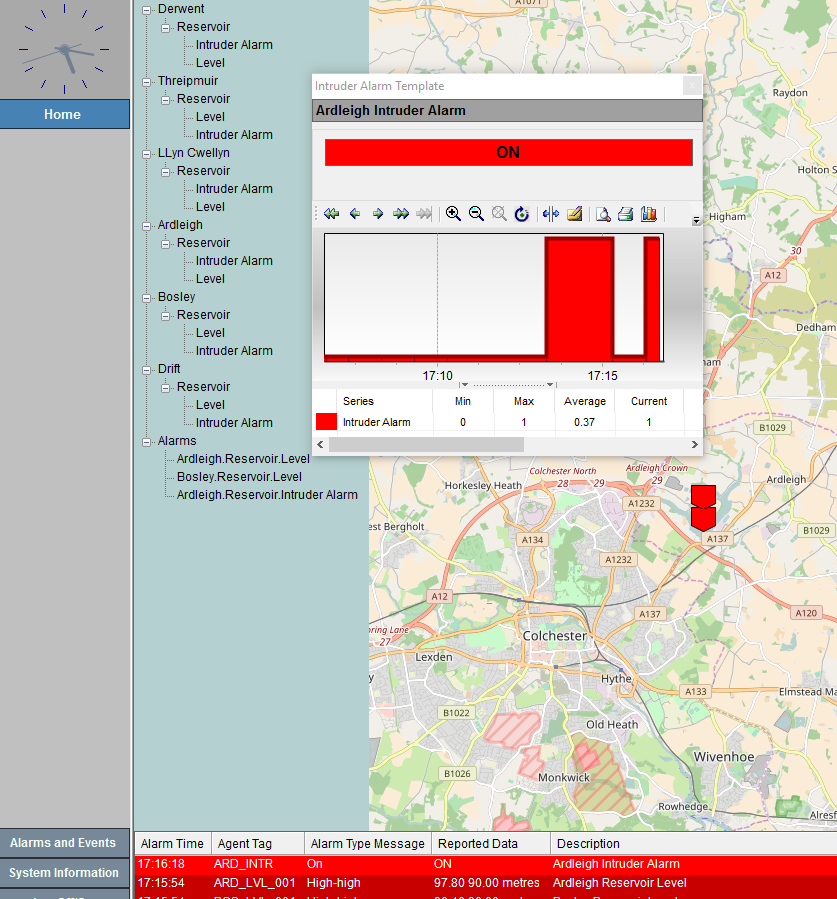 From any zoomed map view, click the Home button top-left on the navigation template, and this will display the Overview form at its startup zoom level